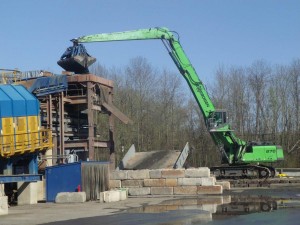 Dependable uptime is critical to sustain a continuous flow of material involving more than 350 workers in the project.

To keep these trains on schedule, GE relies on two purpose-built material handlers from SENNEBOGEN, an 870 R-HD and an 870 M, each moving 2,500 to 3,000 cubic yards of sediment per day from hopper barges that continuously cycle up and down the river filled with dredged sediments and water removed from the river.

GE purchased the 870 R-HD after learning about its unique capabilities. “We recognized that our operation required equipment with a specific reach and height,” said Timothy Kruppenbacher, GE’s Operations Manager, Global Operations Environment, Health & Safety. “The bucket had to reach down 12 feet into and across the hold of the 35-foot wide scows, then clear a 30-foot height to reach above the rim of the hopper feeding our processing stations.”

Kruppenbacher explained that it’s not enough for a machine to simply complete that swing cycle. It has to move quickly, to keep pace with the dredging operations at work in the river. And it has to move precisely to accurately remove all sediments from the barge and avoid spillage of any material.

One particular feature of the SENNEBOGEN 870 was especially attractive to GE. “The elevating up-and-out cab allows operators to look down into the barges to maximize the amount of sediment in each bucket and to ensure they are removing all the material right to the bottom of the barge.”

The 870 R-HD is a 200,000-pound, crawler-mounted material handler. In the project’s second year, GE purchased a rubber-tired model of the same machine to service a second processing station north of the 870 R-HD. In addition to its precision, this unit has a wheeled mobility enhancing its capabilities. “It’s a more versatile machine,” Kruppenbacher said. “In the off-season when we’re not operating, we can easily move it where we need it to perform lifting operations to support maintenance activities. Also during the off-season, we use it often because we’re able to move it to and from material staging areas to more easily move, mix and pile material with it.” 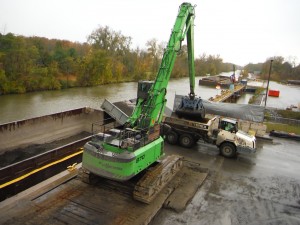 Two SENNEBOGEN 870 material handlers unload 6 to 8 barges of dredged sediment from the Hudson River every day.

The environmental dredging project is performed approximately six months a year, 24 hours a day, six days a week, requiring the two machines to operate around the clock.

Since dredging began in 2009, more than 2,500,000 cubic yards of PCB-containing sediment have been removed from the river. In 2002, EPA issued a Record of Decision requiring dredging of PCB-containing sediments from 40 miles of river bottom between Fort Edward and Troy, N.Y. EPA determined the areas and depths to be dredged, based on more than 60,000 sediment samples collected and analyzed by GE. Support facilities to transport, dewater and process the dredged material were built, including a 1,500-foot-long wharf for barge unloading, size separation equipment, dewatering equipment, staging areas, roads, more than seven miles of rail track, and a water treatment plant larger than some municipal water treatment systems. Dredging began in May 2009 and continued in 2011, 2012, 2013 and 2014. The sixth and final year of dredging will be performed this year. 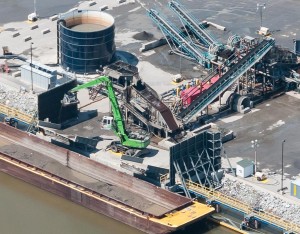 The 870 machines combine speed and precision to clean out the lightweight barges without damaging their hulls.

Uptime is a critical factor for equipment on this job, as GE’s work schedule is restricted by the seasonal closure of the New York State Champlain Canal each year. John Waechter, Project Manager for the project’s processing operations contractor, CB&I Environmental & Infrastructure (CB&I) said, “We are very focused on proactive maintenance here. Even a few hours of unexpected downtime has a costly ripple effect on the whole project. Altogether, there are more than 85 pieces of heavy equipment and vessels working in a continuous process, running 24/6 each week of the season.”

At any given time, 12 to 14 hopper barges carrying 600 – 800 CY’s are cycling between the dredge location and the loading station, a distance of 15 to 35 miles each way. The water treatment plant is processing 2 million gallons/day. An interruption anywhere in the process would create serious problems for the more than 350 employees working on the dredges and at the support facilities.

Each Sunday, CB&I maintenance crews inspect and service all project equipment. At each 1,000-hour operating interval, the 870s are serviced by the local SENNEBOGEN distributor, Anderson Equipment 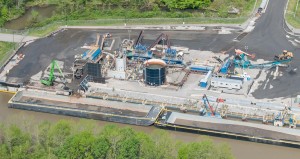 General Electric constructed two large wharf facilities to process the material and treat the water from the project’s dredging operations.

Each barge requires four to six hours at the unloading station, including about two hours to decant the barge (pump off the free water). The SENNEBOGEN machines then move the material from the barge to a feed hopper equipped with a grizzly screen. On an average day, together they will unload six to eight barges or up to 5,000 yards of sediment.

Operators on the 870s work in pairs, working 12-hour shifts. Waechter said the operators, from Local 158 of the Operating Engineers union, are pleased with the performance of the SENNEBOGEN material handlers. “It’s a very comfortable cab for working long shifts. The joystick control and hydraulics are so responsive and accurate that they can pick individual logs and oversize debris right off the top of the hopper grizzly screen.”

Kruppenbacher compliments the speed, precision and safety of the equipment. “With the level-cut buckets, the 870s can clean out the barges down to bare metal, without damaging the bottom of the vessel. These barges are light, built for minimal draft in the river but we have not had any problems with damage from the use of the 870s. The machines have performed very well, and reliably.”

Dredging and backfilling activities are scheduled for completion this year. Next year, the final season of habitat reconstruction work will be performed and support facilities will be dismantled.