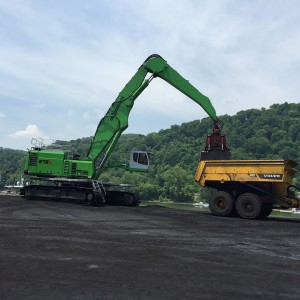 The SENNEBOGEN 875 R-HD at the Donora Dock barge facility features a “Green Hybrid” energy recovery system that reduces diesel costs by as much as 30%.

Donora, PA – Paul Theodorakos, Equipment Manager for Robindale Energy and its associated companies, readily admits that dock operations and material handlers were new to him when his company acquired an existing dock operation in Donora, on Pennsylvania’s Monongahela River in 2014.

“We’re in the coal mining business and, in my 39 years of experience, I never needed to unload barges,” says Theodorakos. “A 1990’s vintage excavator, modified for material handling, came with the Donora property. But it wasn’t capable of handling the volume of coal we anticipated. I immediately started making phone calls, doing research to know what type of equipment would be best for off-loading coal barges. All signs directed me to SENNEBOGEN.”

Seeing a SENNEBOGEN 875 R-HD in action sealed the deal

A trip to the Charleston Bulk Transfer (CBT) facility operated by Maybank Industries Group in South Carolina was in order. Lee Gibson of Gibson Machinery, one of SENNEBOGEN’s longest standing distributors, joined Theodorakos and his team to watch CBT’s recently acquired SENNEBOGEN 875 R-HD in operation. Located on the Cooper River, the Charleston Bulk Transfer facility moves upwards of 12,500 tons of coal per day from barge to shore. This convinced Theodorakos that a similar machine would be ideal for his operations with Donora Dock LLC.

“Our host, Turner Fabian, the President of CBT was most accommodating – he just bragged about his company’s 875 up and down,” recalls Theodorakos. “In this case, the machine bore out his words. I was impressed with a lot of its features, and especially its ‘Green Hybrid’ system.” 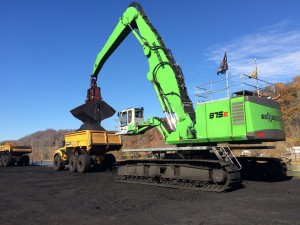 The 875 is fitted with a 14 yd. bucket to transfer coal to trucks from as many as 6 jumbo barges in a day.

The large third hydraulic cylinder mounted between the two main boom lift cylinders on the 875 R-HD is the centerpiece of the new Green Hybrid energy recovery system developed by SENNEBOGEN. It captures power when lowering the boom in order to apply it again with the next lift. SENNEBOGEN’s advanced design utilizes the firm’s well-proven hydraulic expertise along with accumulators to maintain an extremely smooth operation while cutting the required energy by 30%. The resulting fuel savings are significant.

Meanwhile back at the Dock

While SENNEBOGEN completed assembly of their new SENNEBOGEN 875 R-HD, the Robindale team returned to Donora to commence operations with a SENNEBOGEN 850 M. The rubber-tired 850 M was fitted with a 5 yd. bucket. By the time the 875 arrived this summer, the 850 had earned a permanent place in the Donora fleet, as a back-up and supplement to the larger machine.

After testing the 875 through a few hundred operating hours, the onsite manager of the Donora Dock, John Ross remains convinced that this machine was the right choice. Swinging its 14 yd. coal bucket through several loading cycles per minute, he says the machine has the potential to offload as many as 6 jumbo barges in a day. 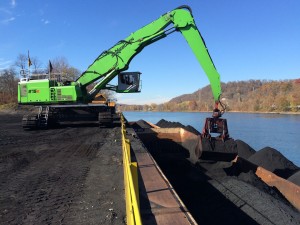 The 875’s glass-floored cab elevates and extends outward to give operators a clear view into barge holds, allowing them to offload a full barge in less than 90 minutes.

Ross and the 875’s lead operator were part of the team that visited Charleston and recommended the purchase of the machine. “It’s meeting all our targets,” Ross reports. “We can unload a barge in 1 ¼ hours or less and, with two barges at the dock, we can unload them both without having to move anything around. The operators just love the machine’s elevating cab with its glass floor, and the excellent visibility it allows when the cab extends out above the barges. The 875 is very quick, very agile and stable. It’s a well-designed machine.”

“But the biggest thing is the fuel!” Ross continues. “In 39 years, I never saw a machine that big use so little fuel.” Recalling the 43% saving in diesel costs that CBT has achieved in Charleston, the machine in Donora is “right on track” to produce comparable results.

“We spent a lot of time making this decision, looking at other equipment,” says Theodorakos. But this machine is the one that’s really built to be a material handler. We’re happy with our decision.”