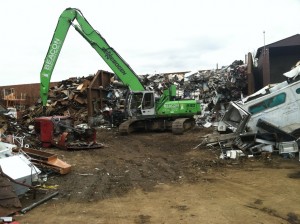 After shopping the new and used equipment market, Beacon’s Clyde Cameron III found that the SENNEBOGEN 830 R-HD offered the best balance of price and value in tracked machines for his two scrap facilities in Newark, NJ.

South Amboy, NJ – A quick scan around the recycling yard in South Amboy, NJ, tells you that Clyde Cameron is a value-conscious equipment buyer.

Here, at one of the two Beacon Scrap Iron & Metal facilities south of Newark, NJ, the fleet covers a wide mix of varied equipment makes, models and vintages. Against this setting, a brand new 830 R-HD scrap-handler in fresh SENNEBOGEN green stands out.

Clyde Cameron III takes the lead in equipment purchases for his family’s 40-year old business. He explains, “It seems the only thing you can’t buy used these days is a good material handler on tracks. They are rare, people normally use them until they are no good. There are lots of wheeled machines around, but everything we saw on tracks had too many hours for the price. When we compared the cost of a new SENNEBOGEN, it really split the difference between a used machine and the new cost from other manufacturers.”

Cameron often works closely with Dominick Vecchiarelli of Binder Machinery when he’s sourcing equipment. Binder is the SENNEBOGEN distributor in the region, and Vecchiarelli believes that the purpose-built design of the green machines makes them the more cost-efficient choice for Beacon’s operation. “When you convert an excavator into a material handler, even at the factory, there’s an added expense. It’s expensive to begin with and then it’s expensive in fuel. SENNEBOGEN machines are made for this job. You aren’t paying for a dirt machine, then paying to make it do something else.”

Cameron says, when he began looking at new machines, he was immediately attracted to SENNEBOGEN’s purpose-built features. “All the same size class machines that I saw were around 20% higher in cost,” he reports, “and they still couldn’t do the same job. Not only did we get a better machine, we got it for a better price!” 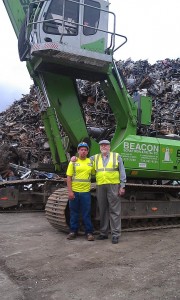 Representing the third generation for the family-owned Beacon Scrap Iron & Metal, Clyde Cameron III, left, is joined by his grandfather, William Smith Sr., the founder of the company.

The engineering of the 830 R-HD helped Clyde deal with being squeezed on space as well as being squeezed on costs. Between the South Amboy facility and the firm’s other location in nearby Freehold, NJ, Beacon Scrap Iron & Metal processes in excess of 5000 tons of ferrous and over a million pounds of non-ferrous per month. In June this year, the South Amboy yard was holding a lot of 15,000 ton of ferrous in reserve stock, waiting for the market to offer more favorable pricing. On top of that, traffic lanes were busy with a steady stream of residential and light commercial scrap. Furthermore, Beacon maintains hundreds of roll-off boxes throughout its service area, and can receive between 400 and 500 customers in total every day between both locations.

The two yards, which also share the use of a fully portable shear/baler/logger, are each situated on just four acres. In this space, they need to accommodate processing, stockpiling and loading. Today, both sites now rely on an 830 R-HD for loading trailers and feeding the shear.

“We especially like the SENNEBOGEN units’ ability to operate close-in,” says Cameron. “Some of our older cranes had 3-piece booms for tight quarters, but they are hard to find anymore. When we have a big pile like we do now, we have to load 15 to 25 trucks a day. The 830 has a 2-piece boom and stick that can load close in and it has good reach for its size. It also lifts the same weight over all sides so there is less need for it to move around.”

Deciding on the new SENNEBOGEN machines was a carefully considered purchase for the family business. Clyde Cameron represents the third generation of the family to take part in managing Beacon’s business. His father, also named Clyde, and his grandfather William Smith Sr., Beacon’s founder, were also involved in different stages of the purchase decision. “I was put in charge of Research & Development for all our new equipment – though I do more research than development!” he admits. Active in the company for the past 11 years, he has served time operating every piece of machinery in the fleet. He still spends time operating machinery in the yard, but also works with equipment suppliers to plan the company’s next moves. “I’m looking at a few new pieces to add. Next we will probably need a second guillotine shear, for increased capacity.”

When Cameron began to zero-in on the 830 R-HD, he visited another recycler in Staten Island to see its wheeled counterpart on the job. He was accompanied there by his father, who leads the servicing of the Beacon fleet. After taking turns operating the machine, both men were impressed. “We knew they were good machines, because every yard has them and you never hear any complaints,” says the younger man. “At the demo, my father could see how well built they are and how easy they would be to maintain – everything is right there for you for servicing. Having ‘no computers’ on board helps, too!”

The family also gave consideration to the larger SENNEBOGEN 835 R-HD scrap-handler but Cameron’s grandfather, who remains active in the company, agreed that the smaller unit met the price/value equation for their operation. Cameron observed that “…it’s a 90,000 lb. machine that outlifts, outreaches and moves faster than the 120,000 lb. machines they replaced… it does a lot for its size!”

The pair of 830 R-HD machines they purchased from Binder are fitted with 1-yard Rotobec 4‑tine grapples and with 30” Winkle scrap magnets used for clean-up duties. The purchase also included a 60” Winkle magnet used for loading selected ferrous and irony aluminum materials. “We’re also one of the top 10 aluminum buyers in this area,” Cameron notes. 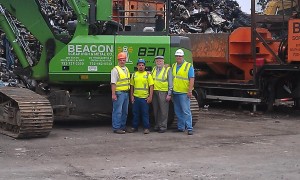 The value of trust

Dominick Vecchiarelli has been Binder’s representative for 14 of the 20-plus years that the distributor has been supplying equipment to Beacon. He has known Clyde Cameron since Clyde was 8 years old. Cameron recalls, “I always asked every salesman for equipment brochures, but Dominick was the only one who brought me some!” Binder also supplies Komatsu machinery and a wide variety of attachments as well as much of the used equipment in Beacon’s fleet. “Even if Binder doesn’t have the type of equipment I need, I know Dominick will help me find it.”

After working with Cameron on the selection of the SENNEBOGEN machines, Vecchiarelli is quite complimentary of Cameron’s purchasing process. “Clyde’s questions about the equipment are those of an experienced operator and an experienced buyer. He has lived and worked around this machinery since he was just a child, and the things he asks me can be just amazing.” The trust between the two was an important factor in Cameron’s decision to go with the new SENNEBOGEN scrap-handlers instead of other equipment brands.

After running the 830 R-HD machines for several months, Cameron and his family are pleased with their decision. As Cameron reports, “When we were using our 320 Cats with demo grapples to load light iron or #1 steel, it took about an hour to load a truck. Now, I’m timing it out at about 10 to 15 minutes for a load of steel. The 830s are a lot more fuel efficient than our previous cranes, too. We’ve been able to accomplish a lot more in less time, for less cost!”